Readers of my personal blog know that I am an admirer of tea. I have several tea pots and the associated trappings of a tea maker. Far from being an expert, I do have a lot of experience in the selection of tools and pots, and I try to help others when I see them shopping in the various places I go in Taiwan and other countries. 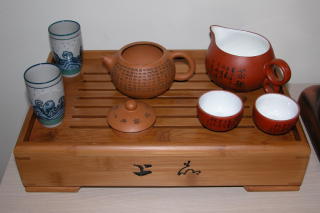 This is my bamboo tray with a new pot I purchased in the center. Also of note are the 2 aroma cups on the far left. I will get to them in a moment. I have been looking for a solid wood tray with a drain and although I have found several, I just haven’t found the one that I want to get – yet. In a few weeks Hui-Chen and I will travel down to Miaoli and Sanyi to check out the woodworking shops for one. 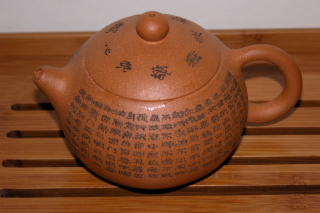 This is the new teapot, which is made from sand and not clay. 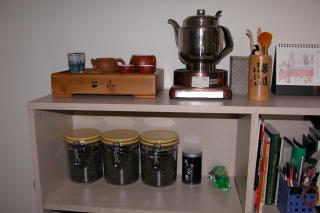 This is the area where I keep my tea stuff these days. Notice the water kettle. It keeps the water at the boil automatically and shuts off if there is no water. I keep the tea in the airtight containers on the lower shelf. Most of the time the teapots themselves are in another place, on display. At some point I will put up a proper display for the pots because they look interesting. 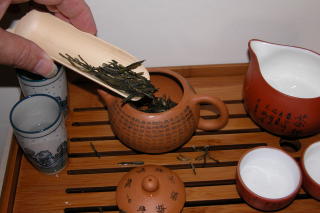 I use a bamboo measuring scoop to put the tea into the pot. You really should not touch the tea with your hands and impart any skin oils to the tea. The principle is to use more tea than you would use for a simple tea steeping (such as British style) and brew multiple, short-duration infusions. The tea maker stops the brewing process by pouring out the tea into the gong-bei (the pitcher) thus arresting the brewing process for that infusion. The timing of each infusion is critical and comes with experience. Subsequent infusions are longer as the tea loses flavor each time. Each infusion is a unique experience as the tea ages in the pot (and cooks to some degree) and the temperature of the water lowers. One always uses the gong-bei and never pours from the pot! This way, each cup of tea from that infusion is the same. 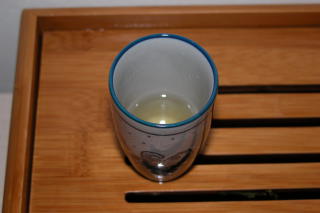 This is an aroma cup. First you fill the aroma cup with as much tea as the drinking cup holds (so it won’t overflow when you invert it). 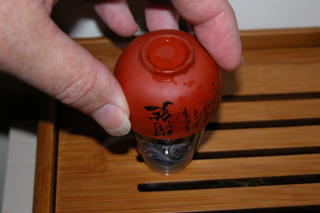 Next, place the drinking up over the aroma cup. 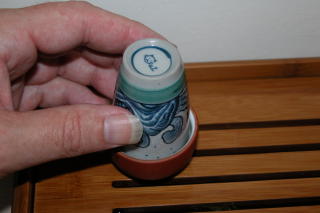 Invert the aroma and drinking cup together like this…. 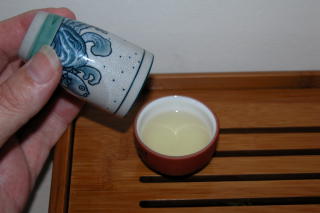 Then slowly remove the aroma cup, exposing the drinking cup and the perfectly brewed cup of tea. 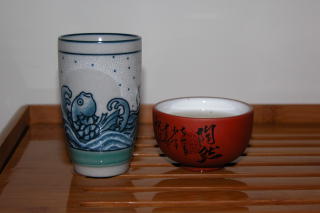 The aroma cup is thin at the bottom and becomes wider towards the top. This contributes to the development of the tea aroma. Each infusion has its own unique aroma, which changes significantly as the aroma cup cools. The tea should be enjoyed between inhaling the aroma of the tea.