Hui-Chen and I took off this afternoon for an interesting area nearby. We went to the old city of Dasi (“big river”) and checked out the woodworking shops on the old street. Dasi is noted for having some of the oldest buildings around, some of which date back to the Ching Dynasty. Also, there are some fine examples of baroque architecture, the result of Spanish influence long ago. Dasi is famous for a tofu product called “do-gun” and also for some very fine woodworking, both furniture and sculpture. 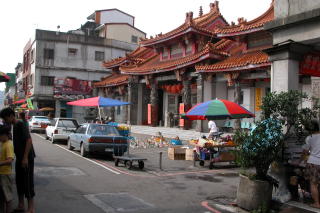 Dasi has a really cool temple that looks like it belongs in a movie. Every time I am there I think I am about to hear a director yell “cut!” lol Just like in Biblical times, the temples nowadays are centers of commerce (often seemingly more commercial than religious). You can see children’s toys laid out for sale right in front of the temple. 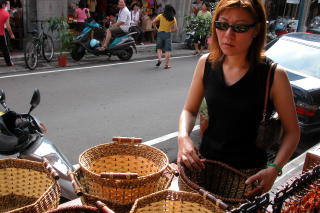 Here Hui-Chen is seen checking out some of the hand-crafted baskets. Stuff like this is very well made and yet inexpensive in Dasi. This township lies in the foothills of an area called Fu-Shing and is also on the doorstep of an area called Lalasan, which is a mountain resort area. Dasi is a great place to start a day tour of some of the most interesting topography in northern Taiwan.

After walking around, taking photographs and visiting some of the coolest woodworking and tea shops around, we decided to check out nearby Shimen Dam ???? (literally “stone door”) because its been in the news recently due to overflow from the last 2 typhoons. This is a 5-shot panorama of the lower basin which is the output of the spillway seen in the distance on the right 1/3 of the shot. We wanted a closer look at the dam itself, but we had to hurry because daylight was fading fast. 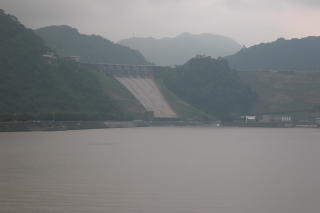 This is a shot of the spillway, taken from the same location as the above panorama, but using my 8x zoom. An hour later we were walking along the top of the dam itself. 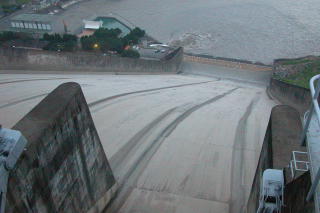 This shot should give you a good idea just how large this sucker really is. I’m looking over the railing from the top of the spillway. This shot is grainy because I set the Nikon to 800 ISO because of impending darkness. Yeah, those are cars at the bottom. 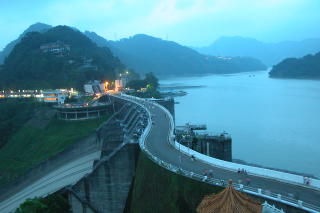 There is a scenic overlook at the far end of the dam, so we walked up the long flight of stairs so you could get this view from the top. Taken at dusk, the photograph has a cool blue hue to it, and the exposure time was over 1 second (notice the blurred people walking). The dam has some nice tea shops and restaurants up on the top, but you have to put up with the annoying salespeople trying to hustle you into the restaurants. Just ignore them. 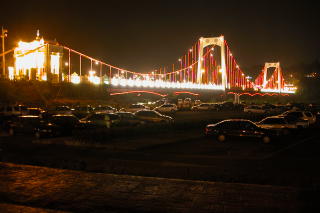 Time to leave the dam and head back. We again passed by Dasi, where by night they light up this beautiful pedestrian bridge. There are food vendors here (like most places in Taiwan) and you can get some local dishes and enjoy them while looking at the bridge. I took this shot from our table. 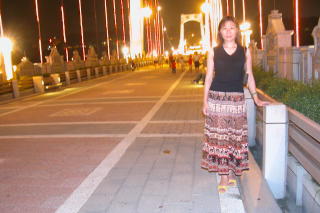 The last shot for this entry is Hui-Chen, standing on the bridge, doing what she always does: look awesome. There were more cameras on this bridge than I saw anywhere else throughout the day. So many people were taking photographs that I’m sure I’m in at least 20 of them! Hey, it will give them something to laugh about later when they review them, right?