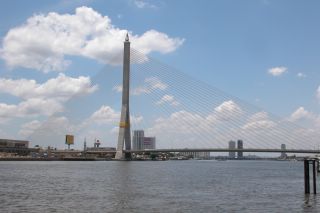 Bangkok supension bridge. It looks a lot more impressive in person than in photographs. 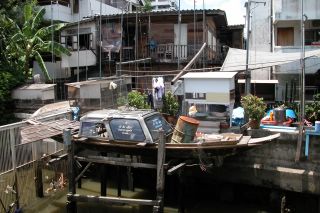 Thai home on a canal. The canal has literal locking gates on the outside connection. 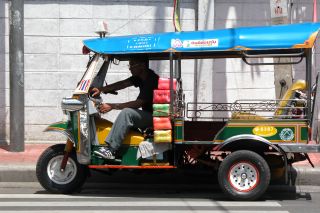 Not knowing exactly when I can get online next, I’ve taken to writing my blog entries offline and then uploading them later. I want readers to understand the motivation behind what I say. I’m not one of those people who goes somewhere and then starts complaining about everything that isn’t like home. On the contrary. I live and work in Taiwan and am accustomed to a totally non-western way of life. I do complain about things that I think are wrong, or purposefully bad, etc. My motiviation for ranting about Thailand is that I think Thailand is a great place that has been seriously fouled up by outsiders.

After spending several days in Bangkok I am beginning to wonder: just what is the appeal? Let’s postulate for a moment. Take away Thailand’s (Bangkok, really) sex trade, and what have you got? A beautiful country with polite and friendly people which is about 10 to 15 years behind Taiwan or Japan in development. A huge capitol city of 10 million people all wanting your money. Take away the sex trade and I bet that almost none of the people walking around Bangkok would be here. Most certainly the hordes of older white men bent upon enjoying the company of a younger Asian woman (regardless of the fact that they have to pay her for it) would not exist. This also explains why I have yet to see a single older farang with a Thai girl outside of Bangkok.

What amazes me is the quality of foreigners here (or shall I say lack of quality?). It would seem as if the very dregs of the world’s societies have decided to descend upon Bangkok, and for the life of me, I cannot figure out why! Perhaps its to associate with others of their kind in a far away place where they won’t be judged harshly, as they would back home. Whatever the reason, there are people walking around here with whom I would not associate under any circumstances, and they make me feel embarrassed to be a foreigner. When addressed, I speak only in Russian and say that I don’t know English.

On Friday, I saw the previously mentioned Australian steal a plate of food from a street vendor. A policeman was standing right there and motioned for him to pay for the food. He made some humorous facial expressions, and moved around like some kind of retarded monkey until his asinine gesticulations had the police officer and street vendor laughing so hard that they waved him off. I was witnessing a professional buffoon at work. I felt truly disgusted to be even counted in the same group as that moron. I simply cannot wait to get out of Bangkok. I have heard Asians remark that foreigners are too impolite to know enough to be embarrassed. That particular one fits that description.

I have seen nothing which even closely compares to this kind of behavior in Taiwan. It makes me wonder why. Taiwan certainly is a more exotic place overall than Thailand, technically speaking. I can count the times I’ve eaten with a spoon and fork in Taiwan in the last year: 2 times. Here, I can’t even get chopsticks even though Asian food was designed to be eaten with them. The proliferation of farangs makes this place more western than San Francisco. When I travel, I like to get away from familiarity, so Thailand’s appeal (to the typical farang, that is) must come in part from the fact that the eager-to-please Thais have created a western paradise, complete with signs indicting that a vendor uses “soft ice” for “sensitive western digestive.” Poor little farangs. Tummy upset by ice made from local water? Go home. Certainly don’t go to Taiwan because if you can’t eat with chopsticks, you have to go to Mc Donald’s. Otherwise, you can sit and watch the clouds run into the huge mountain range which crashes into the ocean on a pebble beach which rivals’ anything on Hawaii. But, that is Taiwan. You are in Bangkok. So, take a tuk-tuk to a Thai bar and pick out your girl by the number stuck to her bathing suit bottom (and bring condoms).

Again, I am wondering why anyone would spend their vacation dollars here when there are other places with more travel value, where you don’t have to fight people off on the street who want your money. Today, someone (very professionally) bumped into me as if it were by chance. Within 20 seconds he launched into a discussion about where I could find a place to buy some long pants, even drawing a map. I just smiled and took long slow puffs on my cigar as this guy went on and on, clearly to a much greater detail than any “helpful” person would be. This was an agent, a commissioned agent, who gets a cut for every customer he sends to whatever place he is trying to send you. WTF man? Leave me alone. I would like to just walk around and enjoy the local culture. Oh wait. That is the local culture, thanks to the farangs.

Another guy, a tuk-tuk driver, really pissed me off. These guys are amazingly annoying! They pull over on the street where you are walking and ask all kinds of questions like “Where are you going?” and “What do you looking for?” etc. One guy in particular actually got out and starting walking behind me, talking. Now, I’ve been in Asia long enough to know and use standard Asian hand signals, like the one for “no thank you.” This guy ignored that and then went into some diatribe about where he would take me, and for “1 hour, 1 baht” (yeah, just like the internet service – that’ll happen). Finally, when it became clear that I wasn’t going to use his service, he committed the unforgivable sin. He actually said “old man” (meant to be insulting) and then turned his back to get in the tuk-tuk. Big mistake! People who personally know me, know that around the world there are several men, just like him, with stories to tell about how some “old man” kicked their ass after they made that comment, and bad too. I wheeled around and gave him a world-class cussing out in Mandarin followed by a classic “FU!” in Englishee. Later, that same bastard actually stopped and tried to get me to go with him again (if you can believe that!) only this time I snapped his picture! As I passed by him I said “this is going on the internet today” (see photo) and with that, I wheeled past down the street. He took off. Luck for him I didn’t drag him from his little tuk-tuk and beat him within inches of his life, telling him how to explain to his momma that an old man kicked his ass. Now that I’ve said that – I feel so much better!

Thailand is the Cancun of the East. Sad, isn’t it? I wouldn’t go to Cancun if someone gave me a ticket. Why would I want to go to a place populated with idiot American college students doing what they always wanted to do once they got far away from their parents (which is get naked and have sex with as many people from either gender as possible)? Bangkok is kinda like that, only the idiots are from most of Europe and Oceania, and then throw in lots of street vendors and pimps.

But once you get away from Bangkok (like most big cities) things are so much nicer! The first 2 times I visited Thailand I went directly from the international airport to the domestic airport and right up to Kohn Kaen, one of the nicest places I have ever been. I didn’t have to deal with Bangkok and its proliferation of older farangs with young Thai bar girls. Its too bad because Thailand is such a nice place that having to put up with all the crap is almost a dealbreaker for me.

What I really dislike is that in a few days my girlfriend from Taiwan will be here, and for all the outward appearances I will appear to be just another one of Stickman’s Idiots. I can’t wait to see what people will think about us (farangs can’t tell the difference between Thai and Chinese people). The upside is that having a woman with me when I’m walking around may save me from all the people who want to sell me a girl. We shall see.