My very first Taiwanese friend was Mr. Chen Shao Yeou. Mr. Chen worked in a Chinese restaurant in the town where I lived at the time. I met him while working in the restaurant as one of the food preparation chefs.

We lived together in a big house for the workers. This is where I first began to learn Chinese, by associating with speakers of the language in close quarters. Over time I helped quite a few restaurant workers improve their English vocabulary too. One fellow asked me to read the entire contents of his English study book into a boom box cassette recorder so he would have a native speaker reference to listen to. It was nothing more than simply reading columns of words and it took about 30 minutes. Well worth it.

One of the first things that Mr. Chen asked me to teach him was how to correctly say “Excuse me, please.” A very useful phrase indeed. I went over the phrase with him several times a day for a few weeks and he was able to use it OK. In the meantime just associating with him and the other Chinese speakers working in the restaurant helped to improve my Chinese. When someone is yelling at you for more beef from the cooler, it doesn’t take long for you to learn that!

Chen and I ate at the restaurant most evenings, with the rest of the crew. Sometimes we would go out just to get away from the same stuff every day. One of Mr. Chen’s favorite places to go was the Morrison’s Cafeteria located in a nearby strip mall. Mr. Chen liked it because he didn’t really have to say anything to be served, and truth-be-told, Morrison’s was not a bad place to eat by any means. Mr. Chen could simply walk into the cafeteria, pick up a tray, push it along the tray shelf and simply point to whatever he wanted. This was a normal Monday afternoon activity for him as Monday was his day off from the restaurant and he would take a break from Chinese food by eating at Morrison’s.

Sometimes however, Mr. Chen wanted to eat at Morrison’s during the break between lunch and dinner hours at the restaurant. While most of the other workers slept during this break time I recall one Sunday afternoon where Mr. Chen asked me if I wanted to join him at Morrison’s for a late lunch break. “Sure, why not?”

We were in line, doing what we usually did, which was to check out the food and make some comment in Chinese about how it was prepared. It was great hanging out with a professional chef and getting his insights into cooking wherever we went! This day was no different. We were so engrossed in our conversation that Mr. Chen wasn’t paying as much attention as he should have been, and he (accidentally of course) bumped into a woman in line. Usually the lines keep moving but the woman had stopped momentarily to talk with the staff behind the counter, and she wasn’t moving. As I recall the situation, Mr. Chen bumped her a little bit hard. Nothing serious but definitely embarrassing. Before I could say anything he turned to her and said: 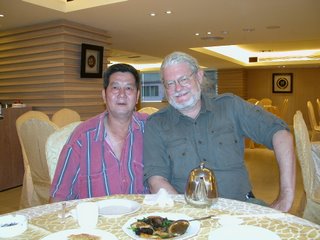 This is Mr. Chen and I together in Banciao, Taiwan 2002. We got together after not seeing each other for 25 years. It was a nice reunion, full of stories from our past, including this one. I have since lost touch with Mr. Chen again; his mobile phone number belongs to someone else these days. Mr. Chen doesn’t know his true age because no one told him when he was born. Estimates are that he was born around 1940 making him about 67 in 2008.