This is what Real Men Do: Burn animal flesh over a fire made from wood….

Michael Turton came over again this weekend and he brought his grill and a ton of excellent sliced pork! The place we chose to go is along the coast in Yong An. I love the area, but the local people have literally trashed it. I don’t understand why, but Taiwanese don’t seem to understand that their mothers aren’t there to clean up the mess they leave behind. Many parts of Taiwan are embarrassingly littered with trash that could have been so easily packed out in a trash bag (which would require aforethought). Hui-chen did bring a roll of trash bags, so we did not add a single thing to this mess. Nevertheless, we did enjoy being there. We are within visual range of the Yong An fish market. We’ll have to take Michael back there to see that the next time! Hui-chen loves to cook on a grill too. Eventually, she took over while we men consumed animal flesh, Japanese whisky and Thai rum. Ahhhh, The Life…. I haven’t had American style BBQ sauce in years! The combination of wood smoke and sauce flavors was quite good! The avid photographer had plenty of photo ops down on the coast. I’ve mentioned this place a few times in the past: 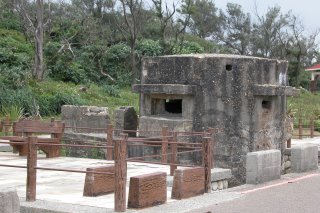 A stark reminder of Taiwan’s military past, in a park along the ocean. This is a great place for a picnic. (Note: this place is on the same strip of road and near the place where we cooked out above.)

The New Hampshire Bushman in Taiwan and The World: Along the Coast 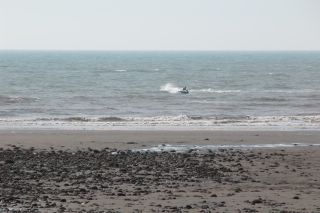 Next stop: China. This is the famous Taiwan Straight. Its a strange place, sometimes peaceful, sometimes rough. This guy was having fun kicking up some spray. 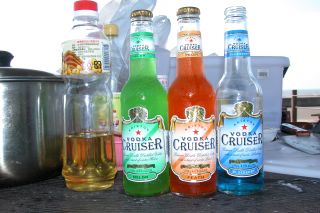 Here are 3 out of the 4 flavors of Vodka Cruisers I have been able to find here on Taiwan: Melon, Peach & Blueberry. They make an ICE flavor and it looks like another brand of cooler drink called ICE. These Crusiers are good man…. (Note: I mention this post because Hui-chen and I were at the exact same place as today’s cookout.) 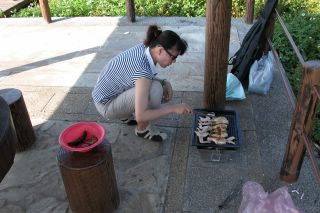 Hui-Chen handing the grill. I was handling the Vodka Cruisers. (Note: this is the same place again. Notice that there is less trash at this point.) 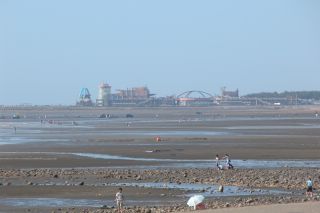 This is a long-distance shot of the fish market from the other side (notice the blue bridge on the left and the glass enclosed spiral staircase). 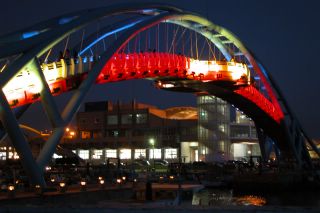 This is a cool pedestrian bridge we saw last night while driving around near the coast (The Taiwan Straight). In the background is a fish market where the day’s catch is sold to the public. (Note: you can see this bridge in the above photo, which was taken from the same place we cooked out today.)

I highly recommend the Yong An area for a good time outdoors with the family and friends!