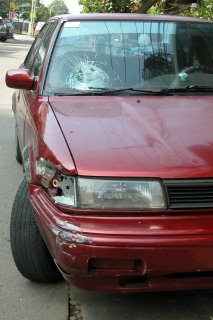 My friend Saumen woke up this morning to find that someone had hit his car during the night. He heard nothing. Witnesses said that a man was “very drunk” and had run into his car with a scooter. Badly injured, the man left the scooter behind and was taken to the hospital by the police. 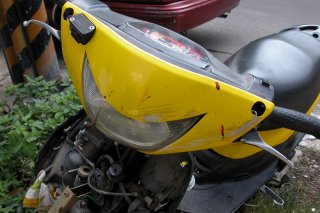 Noteworthy is the amount of blood at the scene, both on Saumen’s car and on the scooter – which is very well wrecked. Its a pretty new Kymco 100cc model.

The man’s sister agreed to pay for the damages to Saumen’s car. Apparently, her brother has a habit of driving drunk and getting into accidents. Some people never learn, and people die every day because of stupid stuff like this. 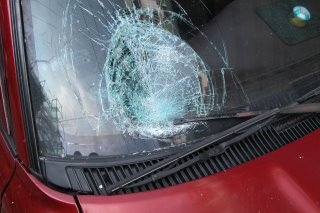 This time he was lucky he didn’t kill himself. Check out this nice face-print in the windshield. Notice that the wiper has been broken off the arm due to the force of his face hitting it.