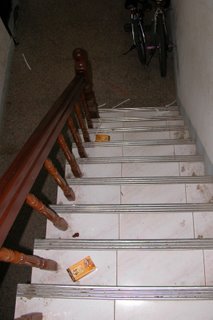 Michael Turton wrote an excellent article called Scams in the Family. This article is very worthwhile reading. There are a couple of things I find amazing, not only about the story, but about life here in general considering this topic. The fact that scams are so rife, and apparently there is no moral restraint upon people to lie, cheat and steal in more and more unique and creative ways is one thing, while there seems to be no shortage of people who are dumb enough to fall prey to them.

Michael is fond of saying how there is no social culture in Taiwan. Its as if people don’t know how to act. Every day I see stuff like 2 guys sitting at a table with 37 empty 700ml beer bottles strewn all around. No one needs to drink that much, but there are no restraining factors (such as common sense) to tell them when they have had enough, nor upon the owners of the establishment to stop selling beer to drunken people. Apparently mothers don’t teach these things in Taiwan. People communicate here by committing violent acts upon the property of others, such as gluing door locks or smashing windows. Again, no restraining factors on their behavior. Why should there be when nothing happens to them? These people have never had a gun stuck in their gut, with a lunatic’s finger on the trigger like I have. These people have never really had to deal with the consequences of an enraged opponent, armed with deadly force. So, they just screw with people…. unrestrained.

There are other ways that Taiwanese relate to one another, such as this afternoon. My building had the power turned off for several hours while the local power company changed out a transformer. There are no emergency lights in the hallways. No sooner had the power gone out, than some kids distributed debris on the stairways, hoping to cause someone to fall and hurt themselves. Here you can see 2 milk tea boxes, and quite a few straws. Mind you, this shot was taken after I walked up the stairs and had kicked some of this trash out of the way. There are probably double the amount of straws that you can see in this photo.

The truth is, I could have fallen down these stairs today and really hurt myself, with the result being some entertainment for the local kids, and absolutely nothing more.

By the way, the hallways are filthy and no one takes any responsibility whatsoever to clean up outside of their door, not to mention putting their discarded shoes out of the walkway. For the most part people in Taiwan think only of themselves.