UPDATE: Here is Michael Turton’s article about this weekend. He has a lot more photos than I do!

This evening, Mr. Michael Turton came up to visit us in Hukou. We had a nice evening planned, consisting of multi-cultural dining and drinking!

We began by taking him to our favorite Philippine restaurant. The food on this occasion was incredible and Michael really enjoyed the company of our beautiful Filipina friends. This restaurant has a nice karoake system with a rather large book of English songs to choose from. 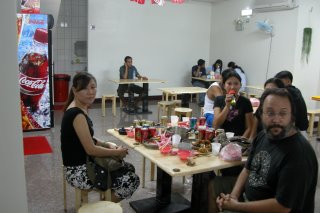 Here we see the lovely Heidi on the mic as Michael (in the foreground) looks at the lyrics on the video monitor. (Photo by Sauman) Heidi’s voice is really great, and she is “easy on the eyes” to put it mildly 😉 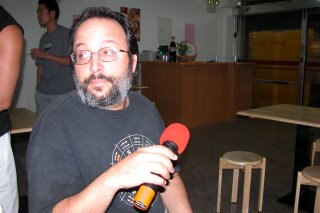 This picture shows Michael immediately after he sang a soul-wrenching version of Billy Joel’s “The Piano Man.” Michael turned around because some drunken Filipino guy was acting like an asshole, yelling stuff and behaving like an idiot. Apparently moved by Michael’s performance he felt it necessary to come over to our table, sit down, and make us listen to his drunken gibberish in whatever incomprehensible language he was speaking. He had a friend come over with him, who basically took on the role of “keeper” because this guy was borderline violent. The boss lady (who was sitting with us) gave him a good cussing out for that. If that weren’t enough, her husband went after another drunken asshole who was causing trouble outside. I can honestly say that I have never seen a man grab a wooden stool and run so quickly outside to bash someone’s skull with it, as I saw this guy run. I can also honestly say that Michael Turton can sing great. 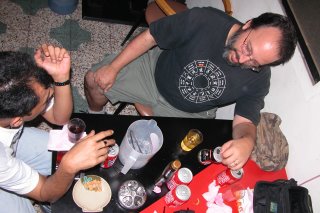 It was time for us to leave anyway, so we took Michael to a Thai place. Here we see Michael and Sauman sharing some stories over Sang Som rum. This was Michael’s first experience with Thai rum and he enjoyed it. 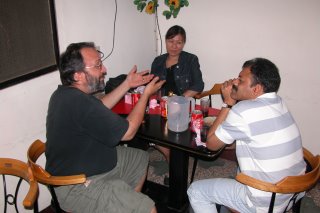 Michael had a bunch of jokes to tell us – some very clever plays on words. We see Hui-Chen and Sauman are hanging on his every word!

We were pleased to host Taiwan’s Man in Black in our humble neighborhood! We hope to see you again soon, Michael!