My Friend First
On the second time I visited Thailand, I was invited to go to a café where a local performer was working. Later I was asked to go up on stage and play a few tunes for a very receptive audience. After hearing each other play on that occasion, we developed a mutual respect and appreciation for our respective abilities. This man’s nickname in Thai is “first” and that is what we call him in English. Over the past year Hui-Chen and I have really gotten to know him and we call him our good friend. First is a thoughtful man, university trained, and preparing his life for the future. Although he is a singer and guitar player, he earns more than double the salary of a bank teller in Kohn Kaen. He normally works every single night of the year with only 1 or 2 nights off per year!

First took us out in a pickup truck to join in the new year’s celebration here. We had two large tanks of water and several buckets with which to literally drench passersby in other trucks, motorcycles or on foot. Not really able to safely get photos of the event with the mayhem going on, I won’t bore you with a verbose description of happenings. Instead I will show you photos and tell you about some other things we did. 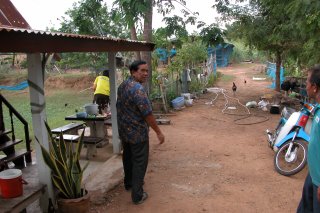 The day after we put on our little performance (previous post), First took us to meet his father and stepmother. First’s father is a local village leader and has a really nice home with a large plot of land. 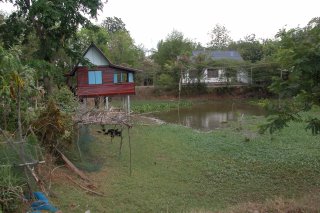 There are 2 bodies of water which are used to raise fish for their own consumption and also for sale. Here we see the main house in the background right, and the little house one of the lakes which is where the family spends most of their time. 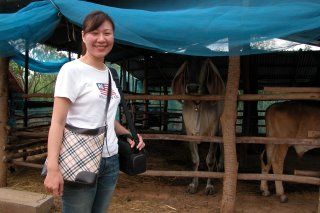 Hui-Chen is standing in front of an ox valued at more than 1 million Thai baht. Its value is derived from its ability to do work on a farm. 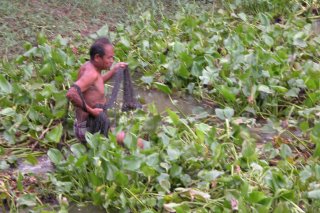 After pouring us drinks, First’s father insisted that he have one of his men catch some fish for our meal. The fisherman threw out a net and then waded around feeling for the fish. 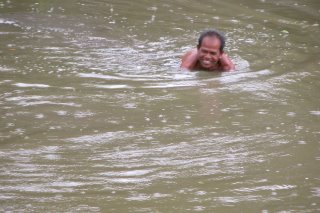 Thai people smile virtually all the time. Its very pleasant to be around such happy people even when they are performing mundane chores. They seldom complain about anything. 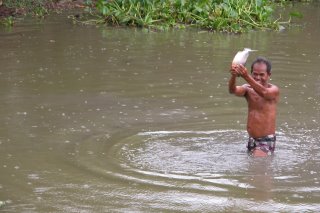 Look at the size of this fish he caught! 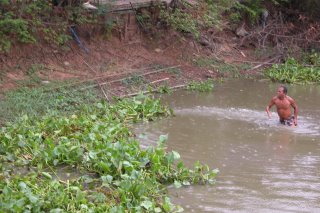 This guy holds the Olympic Fish Throwing record! If you look closely in the upper left you can see the fish in the air on its way to the bank of the lake. 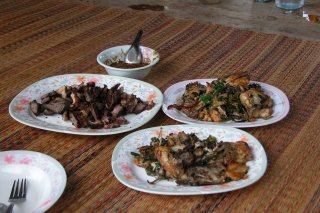 In this shot you can see what happened to several fish that were caught. The sauce in the small bowl is made from all local ingredients, and we were told that every village has their own style of sauce based on availability of ingredients. All these sauces have one thing in common: they will burn your taste buds to cinders.

Later, First invited us to witness a special ritual that Thai young people perform to respect their parents. 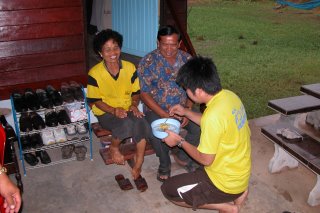 First made a concoction of water and powder in a bowl. He is using a freshly picked flower to stir in the powder. 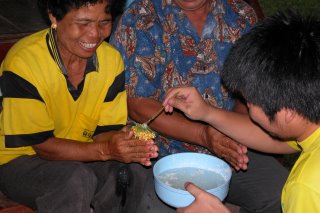 On his knees as a sigh of humility and respect, First used the flower to drip the powder/water mixture on the hands of his parents, starting with his father, and then to his mother. While he is wetting their hands, he is giving them a blessing for longevity and prosperity. 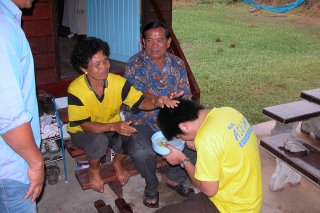 Having completed his blessing to his parents, they touch his head and put some of the water back on him. His parents are saying that he is a good son and has properly shown them respect. I should note that ordinarily, it is considered extremely impolite to touch a Thai person on their head. This social aspect underscores the dignity of this occasion as First must permit them to touch his head. 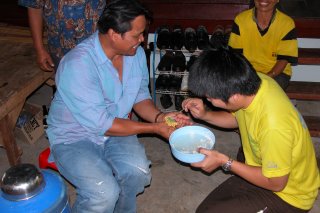 After he respects his parents, he then shows respect to an elder member of his family.

Hui-Chen and I really enjoyed being privileged to personally witness this private ritual.