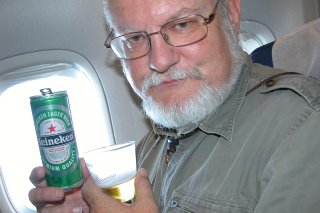 On the way home from Thailand, Hui-Chen and I took a KLM flight. Long ago I stopped sitting by the window, preferring instead to at least stretch an elbow along the asile. However, these days, the asiles are now so narrow that I am constantly being bumped into. This time I decided that if I was going to be inconvenienced, at least I would be able to look out the window and see something for my efforts. I am very glad that I packed my 190+cm/120KG frame into that window seat. Although I did not happen to take a snapshot of it, I did see Pratas Island, a personal favorite cool place in the world. Not realizing that we flew over it each time I went to/from Thailand on KLM, I will be on the lookout for it next time for sure.

Friends of the Bushman know that I despise Heineken, but I was on a Royal Dutch Airlines aircraft, so I should have known better than to just ask for “beer.” I like the Dutch. They do pretty nice chocolate and they do know how to run an airline. I know of 2 Dutch beers. One I call “good enough for the Dutch to drink” and the other one is for everyone else: Heineken. In New Hampshire, we affectionately refer to it as “skunk piss.” Note to Americans with a DNA induced compulsion to make other people think like they do: Please do not argue with me on this point, nor try to “correct” me. This is my opinion and you aren’t going to convince me that I am wrong. Heineken sucks. But, you are welcome to drink it if you want to. Here you can see my “I’m not happy” face.

Added to Heineken, a dirty 747 window did not make this experience any better. As the plane approached Taiwan, the fog on the inside outer layer of the window magically began to disappear. Unfortunately the smog surrounding Taiwan remained, which explains the small number of viewable shots. 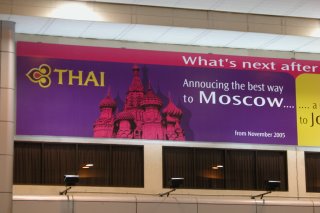 I want to begin by “annoucing” the best way to Moscow might deserve closer scrutiny. This is a huge advertisement in Bangkok International Airport. No one ever runs these things by native speakers.

OK, now we are in the air, and approaching Taiwan! 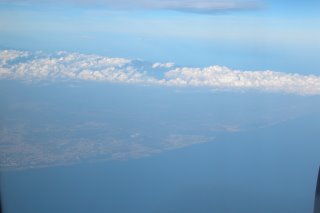 This is the southern end of Taiwan, with Kenting running under the cloud cover out past the right edge of the photograph. 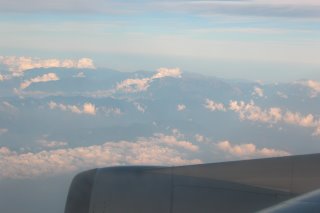 This shot clearly shows just how high Taiwan mountians are. Good thing we are heading North and not due East or we would be in big trouble! 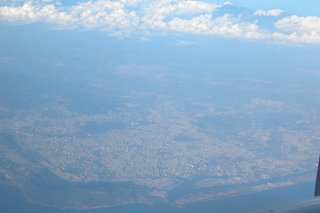 This is Kaohsiung City. 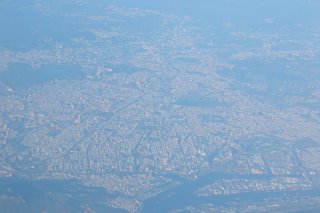 At this point the smog isn’t so bad and you can actually resolve some detail in the photograph. Here we see Kaohsiung City a bit closer up. Hui-Chen is from this city. 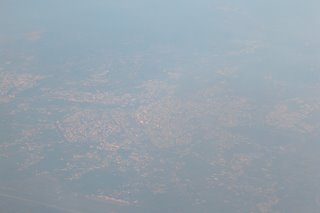 As far as I am able to tell, this is Tainan. The GPS is an excellent tool for identifying places from the air. 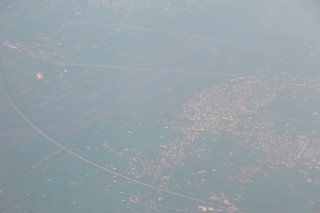 By the time this shot was taken, the smog was so bad that I can’t confirm or deny that this is actually Changhua, but I think it is. 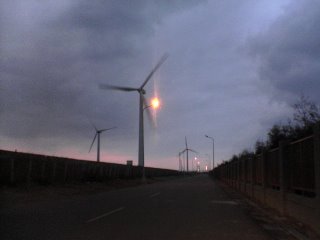 There is one last cool shot that I want to share. I used to live on the north side of Hukou and I could see a small “windmill farm” consisting of 3 units, from my window. I rode my bicycle up there a few times. They are located in the Yongan area, north of the fish market. Once, Hui-Chen and I took our friend Greg for a drive and we ended up very near to them, and I snapped a shot of the 3 units using my mobile phone, seen to the left. I used them as a daily gauge of air quality based on their visibility, being roughly 7 KM from my home at the time. 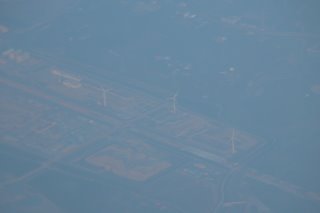 When this shot was taken our altitude had been reduced significantly as we were on the approach to CKS.

This is a shot of the 3 wind power generators that I have seen many times from ground level. Yeah, I know this is geek stuff but I think that things like this are very cool.