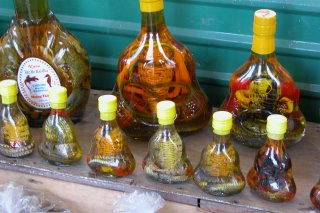 When I was in Laos, I saw some bottles of “medicine” from Vietnam. The bottles contain herbs and “wine” (meaning some kind of alcoholic beverage – Asians frequently confuse wine and liquor), plus one or several poisonous species of reptile or invertebrate. Often the mixture includes large ginseng roots. Here are a few examples of bottles for sale. The center bottle has a large cobra that is holding another snake by the head in its mouth. To the right of that bottle is another cobra that has the tail of a scorpion in its mouth. I think that is the coolest one I have ever seen. Notice the bottle to the far left (read the label). 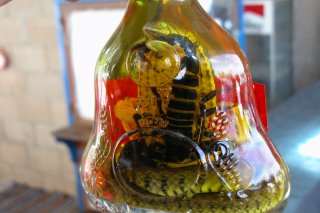 This is a closeup of the cobra holding the scorpion. The price ranged from less than 100 Thai Baht to a few hundred TB (about US$1.50 to 5.00). The label instructs patients to take doses of this medicine for lumbago, rheumatism, and several other innocuous non-specific complaints of pain. I got 2 bottles. One is a very small bottle with a fierce looking pickled cobra tightly packed inside. The other has 2 frighteningly large scorpions preserved in the juice. The next time some obnoxious, red mouthed Taiwanese drunk starts toasting me in a local restaurant, I am going to pull out one of these bottles. 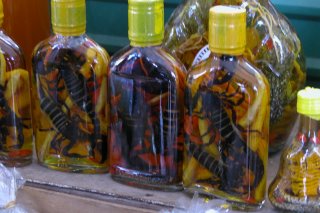 So, which 2 bottles did I get? The small cobra at the far right edge of the photo, and the dark colored double scorpions in the center of the photo.

People really do drink this stuff. We went to a restaurant in Laos that had a large bottle with a frightening large cobra holding another snake, right next to our table. The bottle had been opened and about 1/4 of the liquid was gone.