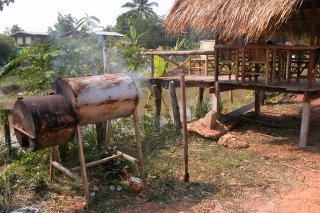 This is the smoker that I had made in Thailand a few months ago. Its going along nicely, cranking out just the right amount of smoke. Since the last time I used it, some improvements have been made at the resort, including this little covered patio. 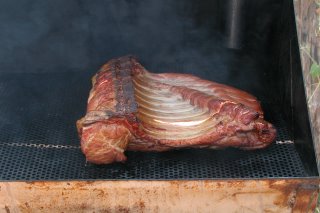 This is 6KG of pork ribs that I smoked. Since Thai people don’t eat ribs like these, I had to ask the butcher to do a cut for me with the meat on the bones. At the resort, the Thai people were snickering while watching me cook on this strange machine, but they were duly impressed with the results.

I want to point out that this is true BBQ, and not grilling – which is what most people think is BBQ. The wood is in the firebox on the side and the meat is not directly over the heat source. The hot smoke cooks the food at a low temperature. These ribs were so juicy that my Thai hosts could not believe it. This is because nearly every other cooking method tends to dry out the meat.