Yeah, yeah, I know – its been almost a month since we were in China and Hong Kong and we still haven’t posted any new photos. I had to move out of my apartment and into a new one because there was a major problem with a water leak in one of the walls. Things have been hectic otherwise but Hui-Chen and I will be able to go through some of the shots and post them for September (that way they won’t be archived right away into August).

Before we actually get to those shots I wanted to show you these 2 shots first: 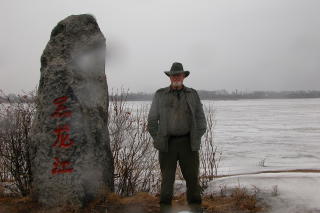 This one, taken in March, 2004 shows me standing by a marker on the Black Dragon River. The ice behind me is about 2 meters thick, and vehicles crossing the river are not so rare, even though it is an international border. In the background you can see the Russian Republic. I am wearing military-issue wool pants and my Cabela’s bush jacket along with my trusty New Zealand river guide hat. 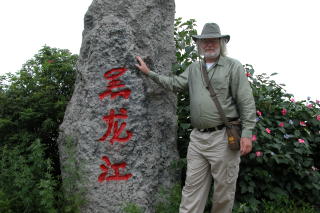 This shot taken in August of 2005 is the same area, with the same marker, only closer up (which explains why the entire background is washed out white). Its not often that people have a chance to return to such a rare place and take the same basic photograph they had taken in the past, but I couldn’t pass up the opportunity. I am wearing a nice Thai silk shirt, and drawstring pants (with the stupid string showing). I have the same hat as before but it has suffered from considerable wear. I replaced the lariat with a leather thong but typically leather doesn’t last that long for me. The hat also has a ventilation grommet missing on the top. People around the world frequently stop and ask me where I bought my hat, if there are any for sale locally, and will I sell mine to them! Here is a list of the countries where that hat has been:

Made in New Zealand and imported to the US, where I purchased it in 2002. Then, it has been with me to:

Taiwan, Japan, Hong Kong, China, Malaysia (Borneo), Thailand and Laos. Please note that I have been to several of these locations multiple times so that hat has enough flier miles to quality for a free ticket!

Let’s face it – I am an experience junky. This is what we do!