Today, Hui-Chen and I went to one of my favorite places: Sanyi. We heard about the wood carving festival and decided that it would make a great Sunday afternoon outing. 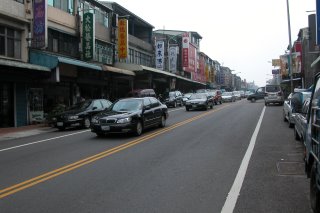 The drive down there was nice enough, but when we got to the exit ramp for Sanyi, we found that the area was choked with traffic. I have never seen this much traffic in Sanyi before. This is a shot of the main street where all the shops are. There was a line of traffic in either direction as far as the eye could see.

We parked our car and walked around, but nothing seemed any different on this day than any other day in Sanyi, except that it was packed with people. There sure were a lot of cars and people but I couldn’t tell you what they were there for. 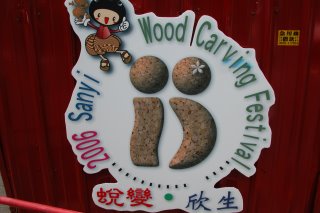 Hui-Chen and I stumbled upon this sign that was placed outside of a corrugated fence (like the kind used at construction sites), so we figured that the “festival” must be inside of this area. We went in. 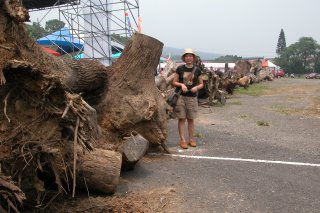 Once inside we saw some examples of different types of wood, and some plaques giving some information about the wood types (all in Chinese). Here we see Hui-Chen standing by some large pieces of root wood used in the local shops. This is a piece of camphor wood and it smelled awesome. 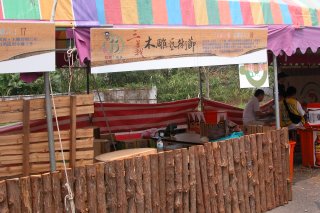 What we found inside the fenced area was a few wood carving artist stalls, with no carving going on, and no artists around (except one, who was on his lunch break, apparently). None of the signs were in English or even Japanese. Just a bunch of children sitting at some tables, playing with toys. Nothing related to wood carving, and certainly no festival. This is a shot of one of the woodcarving artist’s booths. I could hardly contain my excitement as I took this shot. 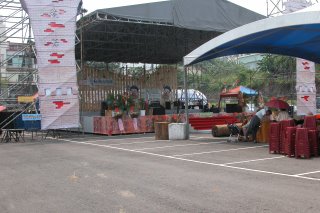 This stage is all set up for something, but no one knew for what. A veteran of many professional concerts, right away I noticed that there was no lighting for a night show, so whatever is going on here must be during the daytime. Nevertheless, there were no schedules posted, no flyers available, or any information whatsoever, anywhere! There was no information booth or informed people available. This is typical of Taiwan, where something is going on but you can’t find out what it is. This place needs some serious help with development of tourist attractions, because these organized events are lacking in both organization, and actual things to do. If we had information about what was going to happen, and when, we could have made an informed decision about whether or not to stay. It soon became clear that the best decision we could make was to go home. 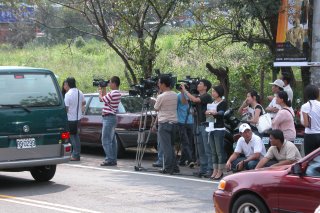 We learned from one of the shop owners that President Chen was supposed to drop by soon. We ran across this group of new shooters and decided that it was time to do the cutout. I don’t like reporters in Taiwan because they start shouting “shoot the foreigner!” and I don’t want to be that kind of entertainment. I did have to ask a few stupid people to please stop laughing at, or talking trash about me. I am always amazed when Taiwanese just say stupid trash about me to each other while I’m standing there (because they think I can’t understand them). Today was no exception.

What a waste of time, and what a shame, too. I love Sanyi and I expected to see at least one artist carving something, you know, at the wood carving festival! In fact, there weren’t even any food vendors in the enclosed area – now that is just wrong!

This festival is 9 days long. If anyone figures out what the festival actually is, I would appreciate knowing.