This shot of Taipei 101 was taken from Dasi, and shows Bade in the very near foreground, Taoyuan City in the middle, and finally Taipei City surrounding the World’s Tallest Building.

What I really want to show you is the inside of this marvel, and what the view looks like while you enjoy the fact that you are standing inside the World’s Tallest Building. 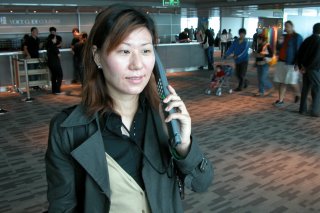 Just give up your ID card for awhile and you can get one of these audio players for free. Guided audio tours are available in 7 languages and I highly suggest that you get one; otherwise you probably will not know what the heck you are looking at. The ID card is just a deposit to make sure they get the player back. The inside observation deck is divided into numbered sections. All you have to do is playback the audio recording for that section and look out the window. Hui-Chen demonstrates how easy it is to follow along with the narrator. 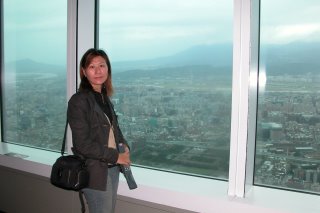 Hui-Chen is standing in front of one of the windows on the indoor observation deck. As you can see for yourself, Taipei 101 is a very tall building. Its pretty weird to be standing inside a building and seeing aircraft flying below you, but truth be told, we were above the departure and approach altitude of Songshan airport. 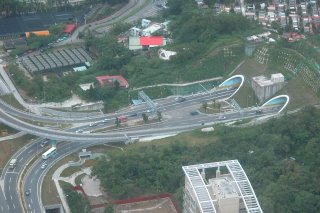 The amount of detail that one can observe from this height is astounding. Even through the glass windows of the inside observation deck you can resolve some very good images using a good zoom lens. 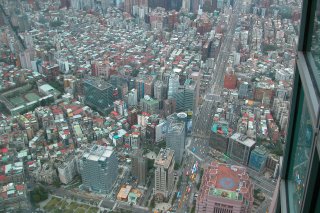 The walls are not just straight and flat. There are corners and nooks from which to look. There is a bit of a green hue to everything though, due to the coloration of the windows. I am not going to discuss the bamboo theme.

Since living in Taiwan, I have become very sensitive to the movement of the firmament underneath my feet, whether Terra Firma herself, or some building. The entire time I was in Taipei 101’s indoor observation deck I felt it moving, although very subtly. Hui-Chen thought I was paranoid at first but later she admitted that on a few occasions she thought she felt it move too. Movement of this type is completely normal in such a structure (even desirable to some degree) but absolutely unavoidable, desired or not. The trick is to somehow stabilize the structure, allowing it to move necessarily, while limiting such movement to within specified parameters. The solution employed in the Taipei 101 design is a tuned mass dampener. If you’ve heretofore been unable to understand what that is, or how it works, please allow me to explain it very simply. 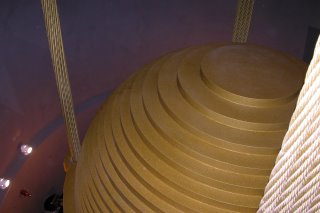 Thanks to the engineers at Nikon, we can see that the tuned mass dampener itself is nothing more than a huge ball of metal suspended by 4 groups of cables. This ball is suspended in mid-air within the building’s central core. Its literally a space near the top of the building, right in the central axis. Imagine how difficult it would be to move this sucker. You could push with all of your might and it wouldn’t budge. Newtonian principles dictate that this huge ball will tend to stay right where it is and will not move unless acted upon it by external forces. Even when acted upon by such external forces, this ball will certainly resist movement. It would take a great deal of force to move such a great weight. 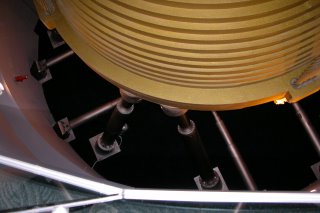 Now, given the fact that the ball doesn’t want to move, let’s now consider that the ball is connected to the structure of the building through giant dampeners – in other words, super shock absorbers. As the building moves (because of forces upon it such as high winds or earthquakes) the building will push against this ball that is suspended within its central core. The building itself will move and the shock absorbers push against this huge ball. The energy of the building movement will be transferred to the ball through the compression of the shock absorbers in the same way that the energy from bumps in the road is transferred to the frame of your car through the shock absorbers. The result is a more stable ride, no matter if you are sitting in a seat in your car, or standing hundreds of meters above the ground in a building. Its a very ingenious design. I suggest that you do some research on it yourself to learn more. 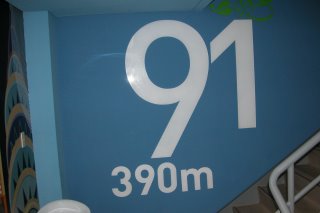 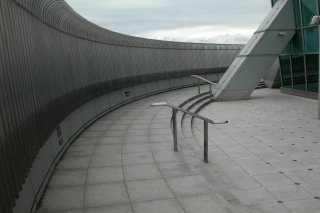 The outdoor observation deck is protected from high winds by a set of stainless steel baffles which surround the circular deck, tangentially. You can look directly out through the baffles which are virtually parallel at any point. In this view we are seeing the baffles mostly side-on so it looks like a ring of steel. 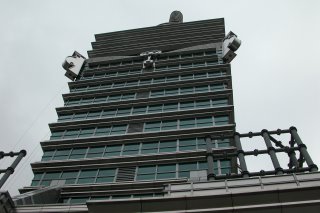 Looking up we see the last few floors of this wonder of engineering, and then the radio mast. 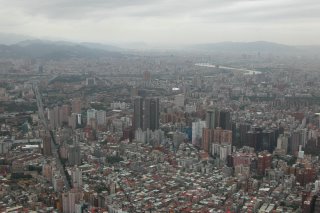 It doesn’t get any higher for us folks, unless we have specific business that takes us up into the last 10 floors or so. Needless to say, this is high enough, thank you!

I hope you have enjoyed my view of Taipei 101. I welcome your questions and comments.