I know we promised you Hong Kong & China more than 2 weeks ago. The reason we haven’t posted the shots from that last trip is because Hui-Chen is away on her own in south Taiwan. Many of the shots we post on the blog are taken by her as well as myself. She also likes to have input on the commentary and information I add to the photographs in the posts. We have been considering doing some bi-lingual commentary so watch future posts for Chinese language content for our Chinese-speaking readers. But, I digress. Hui-Chen is returning this weekend and as soon as she has some free time we will go through the several hundred photos we took and pick out the best ones for you. We have some pretty funny stories to tell, like the Mother who asked me if her 2 sons could pose with me, because they never saw an American before. Little did Mother know that I would tell the kids (in Chinese) to hold their hands like pistols, hehe. After all, they did want to pose with an American, right? 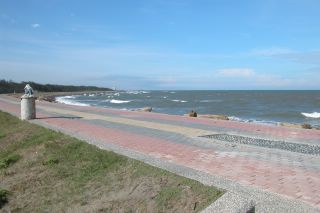 Morning Ride To The Taiwan Straight: 2 hours to and fro. 07:00 to 09:00. The Straight reminds me of Florida as a kid. We lived in St. Petersburg on the west coast. Sun rose on the land and set in the water, just like here. 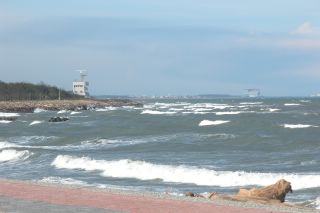 Closeup of Hsinchu City in the distance. This city hosts the world-famous Science Park high-technology industrial area. Some of the world’s hottest new technologies come right out of that spot in the middle of this shot. You can see it thanks to the engineers at Nikon. 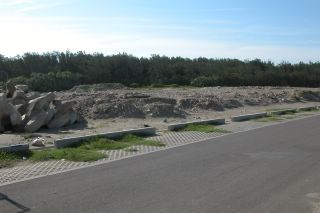 Behind me you can see that the coast takes at real beating from incoming wind and waves. Typhoons are frequent in Taiwan and this area is not immune to the effects. 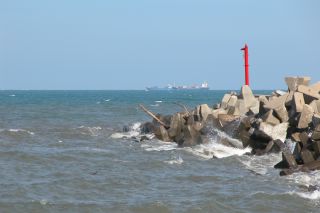 The Straight has a great deal of shipping traffic. I can often see several container or tanker ships from the window in my apartment. 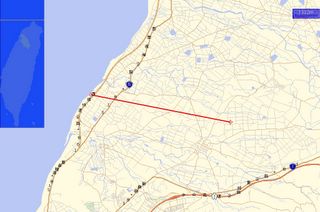 This map created with my (GPS aware!) Taiwan mapping software shows a line-of-sight rhumb line from my apartment on the edge of Hukou to the local water park. Today’s ride was very close to that park, just north where you see the small “cut.” According to this map, the line is exactly 8.87km long. Altogether I rode about 15km. A nice lazy ride over 2 hours. 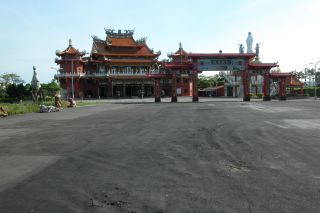 Along the way is a huge temple which is very large and impressive looking. 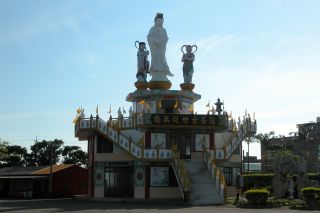 A shot inside the gate shows this interesting feature with children on top.

One thing that I must point out is, I am unfamilar with the belief systems here. My photographs and descriptions are meant to be informative and not demeaning or disrespectful whatsoever. I am open to correction on any such points you see in this blog. 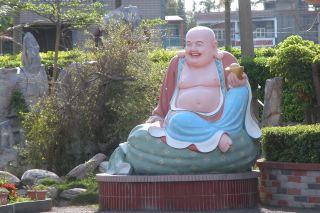 There is also a rather happy looking fellow, holding a large piece of gold money. 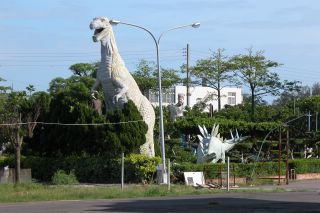 And, believe it or not, this temple sports not one, but two dinosaurs! Yeah I know this shot is annoying, but I didn’t want to ride my bike up close to the temple out of respect. 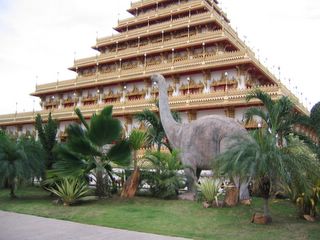 Now this isn’t the first time we’ve seen dinosaurs at temples in Asia. This shot taken in Thailand (by Hui-Chen) shows a large model of a dinosaur at the front corner of the temple. Dinosaurs were discovered in Thailand fairly recently (see this article in the June archives for more on dinosaurs in Thailand) and the Thais are very proud of this fact, so its common to see dino models in many places. I have no idea why dinosaurs are on the Taiwanese temple property however.