Its Because Of All The Cool Stuff I Get To Do
This story is about one of those moments in life where you know you are making a difference in someone else’s life – you are showing them new things and teaching them about other cultures. Bushman lives for these experiences. I got to do something really cool, and this story is about that event. 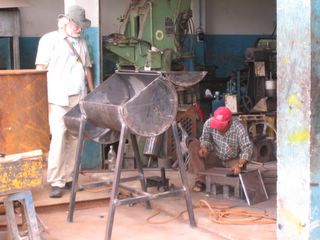 While in Thailand, I commissioned the building of a new wood BBQ smoker to some rough specifications I gave the machine shop. I worked with the shop for over a week to get it done. Its based on a Texas offset design, with some changes. I am planning to make more changes to the design for a premium new product to be offered for sale in 2006, manufactured in Thailand. Thai workers are really great and these guys went the extra mile for me. 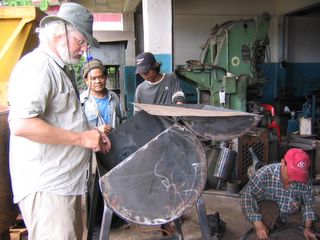 Here you see me going over some of the dimensions with the lead person (seen behind me on the left). You can imagine how difficult it was because I cannot speak Thai, and none of the workers can speak English. 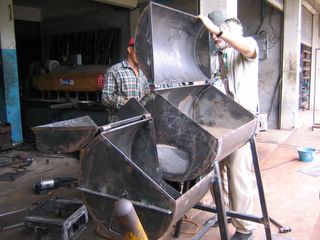 Checking the form and fit of the unit as it nears completion. It is a little rough around the edges, but not bad for people who never saw one of these before. 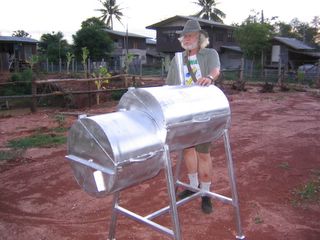 Once completed, the shop workers painted it silver (without asking me!). We then put it in Ben’s pickup and took it out to the village where we had enjoyed several evening meals with the local people. There is an abundance of wood in the village and we wanted to give the smoker a good test before I returned to Taiwan. 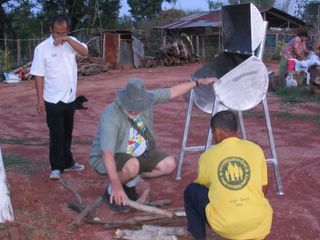 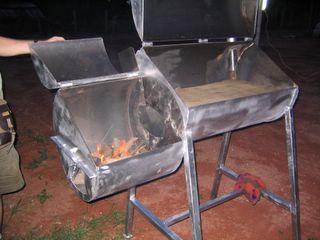 We used some locally made charcoal to start the burn out. Anything made from sheet metal should be burned out to rid it of any chemical impurities. We burned it for more than 2 hours, until the chemical smell was completely gone. After that we wiped down the inside with clean rags and then went onto the cooking fire. I wouldn’t normally have done it quite in that way, but I had to work with what I could do in the time we had. 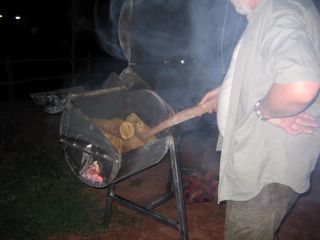 Once burned out, I placed the cooking wood I had selected into the fire box. The villagers use wood for cooking, but only as a fuel source. They were going to use a piece of rubber bicycle tire inner tube to light off the charcoal. It took some explaining to get them to understand that smoking food is cooking it with the heat of the smoke so its flavored by it. The food is not enclosed in a pot – its open to the smoke and thus influenced by the flavoring properties of the smoke. Rubber does not taste good on food, trust me. 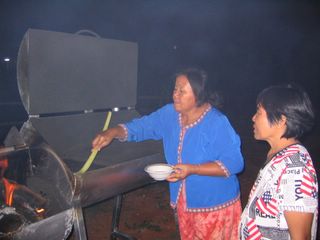 When the cooking fire was nearly burned down and ready, the local people used a bamboo brush and generously coated the cooking grate with cooking oil. They were very enthusiastic about the smoker and sat patiently all the while, waiting. 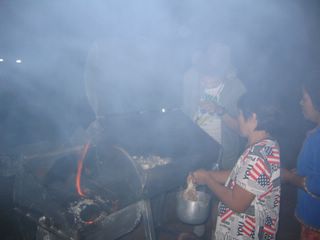 Extremely curious about this totally foreign of method of cooking, the villagers asked if they could cook some of their own prepared chicken. Certainly! They braved the smoke of the cooking chamber and laid out a pot of their marinated chicken on the cooking grate. 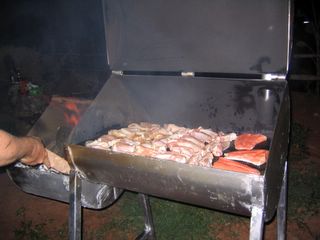 Here you see the food laid out on the cooking grate as it was about to begin smoking. There is the local chicken to the left, pork ribs in the center (similar to the Arkansas ribs of the US) and red snapper fillets on the right. 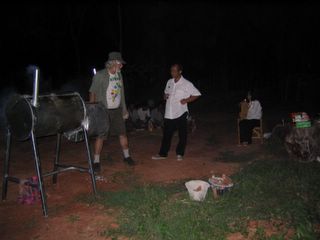 After a bit more fire-tending, Ben and I settled down to some serious BBQing – which means we poured several strong drinks of local Thai rum & coke, and then waited until the food was cooked. 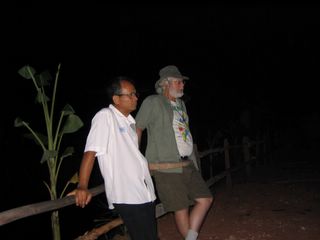 Ah…. The art of True BBQ is so strenuous…. 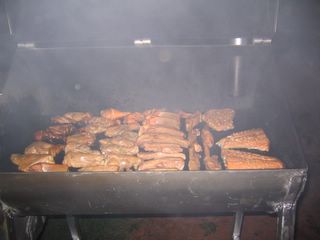 Finally, the food was just about done! Notice how the fish oil has come to the surface of the fish. This is the most flavorable part of the meat and its lost when grilling. Smoked fish is wonderful and the flavor of the smoked meat and oil is hard to describe. 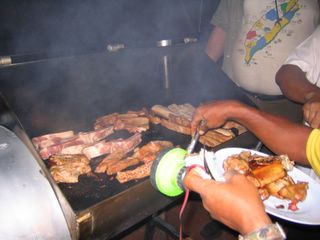 The villagers eagerly retrieved their chicken and also other items which were ready. 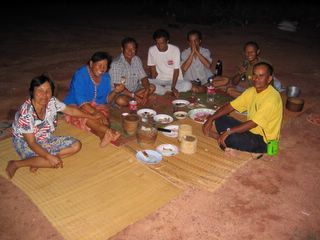 In a defining moment for the Bushman, these Thai villagers got to enjoy a show of a lifetime as I did real Texas style BBQ in northern Thailand in a remote location with a smoker of my own design. I couldn’t have been happier. The villagers loved the smoked food, and you can see that they are all smiles. I left the smoker with them when I returned to Taiwan. I can’t wait to see how they have adapted it to their own local cuisine. That is what I am looking forward to finding out on my next visit!