Every evening, the elephant handlers take their elephants out for a stroll on the town. Its not for exercise – they want to sell you elephant food for you to feed them. This activity is tolerated by looked down upon by the Thais, and rightly so, for the elephants belong in the forest. Oh wait, there isn’t any forest because its all been cut down and the lumber sold! The only remaining virgin forests are in the national parks and that is where you will find the remaining wild elephants. In Khon Kaen, we have seen no less than 7 different adults, and 3 juveniles (one of them is extremely small). Hui-Chen has never seen one up close and has no experience with these amazing animals. So, we bought some food on this one occasion and fed an elephant (a smaller one so it wouldn’t be too intimidating). 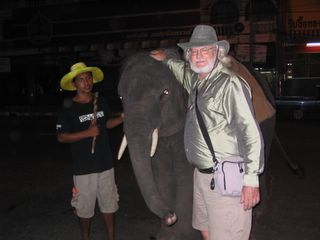 This is me, petting one of the local elephants. Just as Hui-Chen snapped this shot, the beast took a step forward. You don’t get to see me jump out of the way of those feet! I’ve been stepped on by horses and cows, so I’ll pass on the elephant! Oh, by the way, I am wearing a beautiful Thai silk shirt in this shot. These shirts are really great, except that they appear to add 20 KG to one’s stomach in photographs. 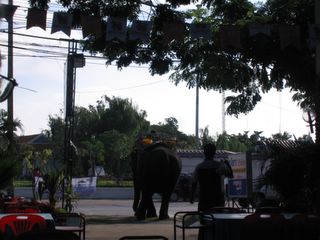 This elephant is out in the daytime right before dusk. These handlers want to get an early start on the competition.

So, we are sitting in this cool restaurant in the evening and we keep hearing this sound, like…. well, like a frog! Hui-Chen takes a look in the restaurant pool (not for swimming, but for the water plants) and she sees this cute little frog. 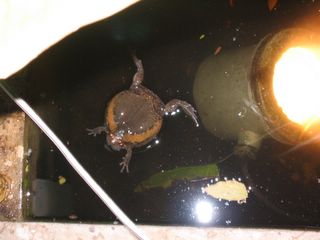 He is happy because he is lucky enough to be a frog in Thailand. 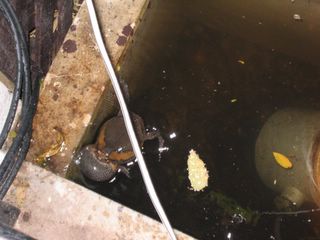 He puffs himself up with air and then makes the noise by inflating his throat. Another almost-impossible shot taken by Hui-Chen (nice work!). You can find things like this just about anywhere you look – but you have to look.

We went to another restaurant, a traditional style Thai place where you sit on a bamboo platform raised off the ground. The biggest problem we had was trying to communicate with the staff. Usually, people look at Hui-Chen and just go off in Thai, and then look dumb when she doesn’t respond (hey she’s Asian right? So she must be Thai, right? All Asians look alike, don’t they?). She says “I don’t speak Thai” in English and the waiter then goes brain dead. So, after me going over to the kitchen and making noises like a chicken, we find out that there isn’t any chicken, and we have no earthly idea what they have – save for some really horrible looking grilled fish. Finally, I just motioned towards our platform and I said “bring food.” The boss smiled and said “ok.” This situation turned out quite nicely for us though. 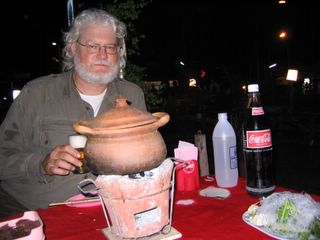 This is the traditional Thai outdoor restaurant, and we are sitting on the bamboo platform (sans shoes of course). You can see an earthenware cooking pot on top of charcoal pot. It turns out that this place was a shabbu-shabbu restaurant – something that we are very familiar with. Cheers! 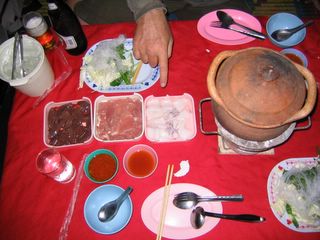 Hui-Chen snapped this shot of me pointing out some of the foods. I’m pointing to sliced squid. To my right (photo left) is sliced pork and then sliced pork liver. You can also see some vegetables and rice noodles. The shabbu-shabbu (or “hot pot”) was quite good and very inexpensive. The Thai sauces are what makes it different from other places. I have hot pot in Taiwan often and I have also enjoyed it in Japan and China, and each place has its own version of sauces and soup broth. This outdoor place was cool.

Notice the Leo brand beer and the plastic ice bucket in the upper left of the photograph. In the tropics, people usually drink beer with ice because its so hot. You can see a couple of rocks in the glass. I’ve become accustomed to drinking beer with ice, and that usually gets some interesting looks from nearby foreigners who ordinarily do not put ice in their beer. In Taiwan, we drink beer from small sized glasses so the beer doesn’t have time to get warm before its gone. That makes total sense in a hot enviroment. I always ask for a small glass when its hot. 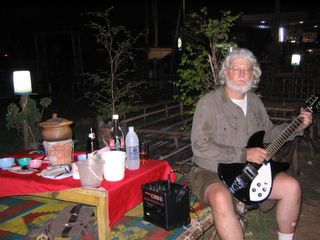 I have a battery powered amplifier and an electric 12-string that I take with me when I travel. Details to look for: My bandaged leg from the scooter burn, the platform behind me which is typical of the ones in the entire place, the 1/2 full glass of beer to the right of the water bottle, my wet hair due to humidity, and the empty bottle of Leo beer behind the plastic ice buckets (which explains the stupid look on my face). Several Thai people from the restaurant (including some of the staff) sat around while I played drunken renditions of famous English songs. Per usual, some Thai guy has some kind of a deal going (in his mind, anyway), so he asked me if I could play “in Bangkok” (yeah, he’s gonna book me there – that’ll happen). I just told him “my Momma says I can play anywhere I want” and he went away. lol