Since I’ve been tired of blogging lately, I haven’t posted much stuff. But that doesn’t mean we haven’t been doing lots of things. So, I’ve decided to post some stuff we did on May 6.

We attended a talk by Syd Goldsmith on how it was in Taiwan back in the 60s and 70s. Michael Turton did an excellent job reporting on this talk (see the link), so I will spare you reading from my comments on it (which wouldn’t add anything, anyway).

After the very interesting discourse, Linda Arrigo invited Hui-Chen and I to join her and her friends for a nice hike in some nearby mountains. That was a blast! 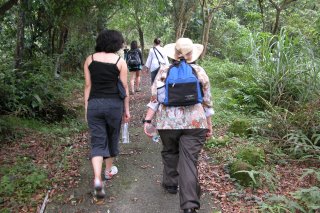 Here you see part of our group near the trail head. At the bottom, its very easy going. We are heading up to Si-mian-tou-shan, Four Face Mountain. The area is Mao Kung, above Chengchi University at Muzha. 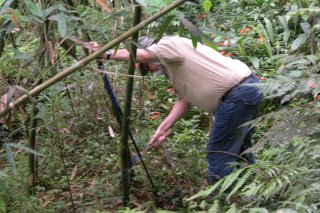 Linda suggested that we cut some bamboo poles because some of the places are slippery and difficult to navigate without something to brace with. Here you see me not only demonstrating my skill with a saw on the bamboo, but also showing why I need to hike more often. 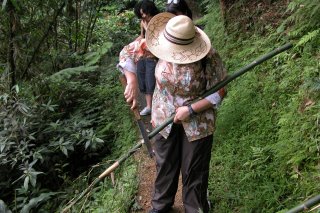 Linda deftly cut off the small branches from each pole and quickly created suitable aids for mountain hiking. 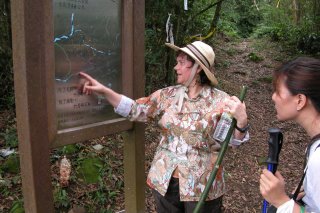 Along the way, Linda took time to point out the various places we would be passing. She is very knowledgable about the area (and almost everything else about Taiwan). 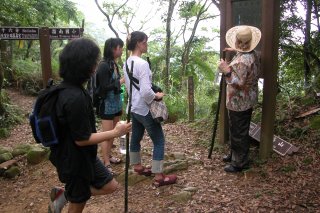 From this shot you can see that the trails are well marked. At this point we are roughly 320 meters high. 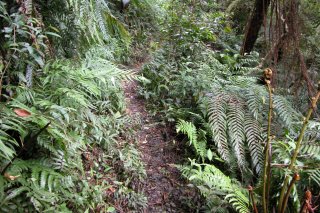 After we got up above 350 meters, the trail became less defined. In some places, the trail had basically disappeared, having slid away. At one point, there was literally a mud shelf that I expected to break off as I stepped on it, but it held fast. Up until that point I was using my GPS to record our track and altitude. I later put my GPS away because the trail was getting tricky and I wanted to have both hands available in case something happened. Not more than 1 minute later, my foot slipped on a tree root and sent me sailing over the edge of the trail. I would have tumbled down the mountainside if it were not for the thick vegetation. I instinctly spread out my limbs and stopped instantly. I was very grateful for the bamboo pole as I used it to climb back up on the trail. 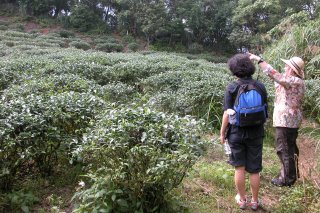 We came across a grove of low-altitude tea. Talking with tea growers near my home, I learned that this lower altitude tea is sold for export only. Its not good enough for local tastes! 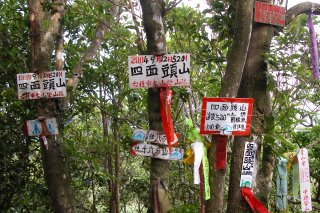 These are various signs that mark the summit of Four Face Mountain – 520 meters. At least there weren’t any KTV ads up there. 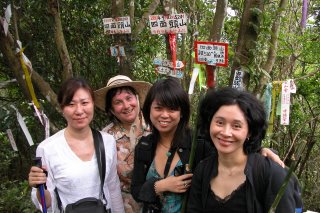 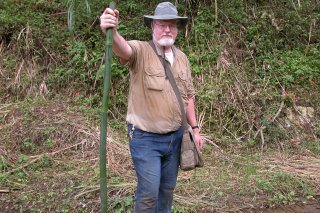 After the summit, there were some tricky trails on the way down, including some extremely slippery boulders, and a trek through a stream. I was battling 2 things: 1, was the fact that my glasses kept fogging up badly. I also had copious amounts of sweat dripping on them. Many times I wasn’t even sure where I was stepping, so I had to stop and clean them. That sucked. 2, was the fact that both Felicia and Rowan had other engagements which required us to get back down by a certain time. I kept thinking about how I was slowing everyone down and that made the last half of the hike less enjoyable than normal, as I was more concerned with speed than appreciation of the surrounding natural beauty. In this shot you can see how wet my clothing is from sweat, not to mention the dirt I picked up from slipping and falling several times. The bamboo pole was very well used! 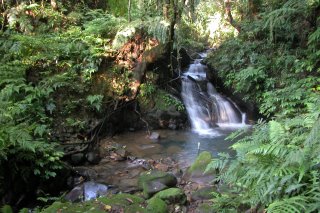 Scenes like this one made any problems on the trails more than worthwhile. Linda knows of another, larger waterfall that we did not have time to visit on this hike. I am looking forward to returning to the area and hiking to that one. 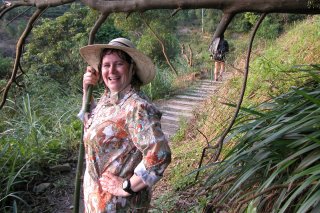 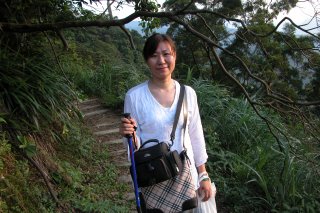 Of course, Hui-Chen didn’t have a single spot of dirt or sweat on her anywhere. She is truly an amazing woman. 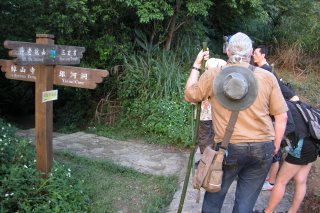 I think that Hui-Chen took this shot just so she could show me how dirty I was later. 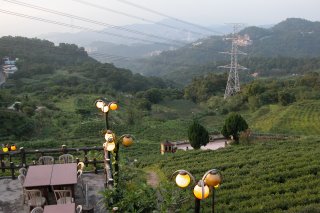 Once we finished our hike, we enjoyed the local scenery and some fine beverages at one of the many outdoor restaurants on the mountainside. We came back by way of the Ing-He-Dong Silver River Cave trail, which begins as a sort of boardwalk of railroad ties.

While not highly technical, these mountain trails are not exactly for beginners either. You just have to use your head and keep yourself safe. Often that means taking your time, so I suggest that you start out early in the morning. Next time we are going to hit the trails much earlier.