First of all, I have to post this review in 2 parts. The problem is, I sent the DV-30 back to the factory after my return from Thailand.

In a reply to Michael Turton I said the following just as I was leaving for Thailand:

“So far the DV-30 has done well, with the exception of 3 files that it severely botched. Before I go and blame the camera I want to eliminate the SD card first (which I believe is the real culprit). On all 3 occasions, saving a file that was over 5:00 (5 minutes) long, the unit locked up and refused to do anything, even turn off, and required the removal of the battery in order to shut it down. Some large file was written to the card but it is unreadable junk, just taking up space. Attempts to play the junk file back on the DV cause it to lock up again. This aspect is very disappointing because I am limited to smaller durations of recording. In all 3 cases, I recorded longer segments because interesting things were going on of course. Now they are lost (and were some of the best stuff, IMO). Oh well, live and learn. I am documenting all of this for a very detailed review later.”

Since that time, I have conducted numerous tests with various SD cards that I have, and found that card speed is a crucial performance aspect. During my Thailand trip I was unable to record videos longer than about 4 minutes because the unit would just lock up, requiring battery removal to reset. The resulting file would be corrupted garbage taking up space on the card. Attempts to view the file in either thumbnail or review mode would usually result in a lockup, or an entirely black display at best.

Yesterday I went back to the store and explained the problem. They called the factory, and the suggested fix was to use a faster SD card. In over an hour of testing with a faster SD card, I found that I could save files of more than 6 or 7 minutes duration, but when testing files over 13 minutes, the same problem occurred. I decided to send it back to the factory for evaluation. I want them to solve this problem.

I would like to find a host for some of the videos I shot so readers can see what they look like. Any suggestions readers?

I had never heard of the DV-30 when my gaze befell it quite by accident while browsing in the local electronics store in Hsinchu. What struck me at first is the small size and cool looks of the unit. I had no intention of purchasing a digital video camera at that moment but I had been considering a video camera for some time since I use digital photography in my work as well as for recreation. While very excellent as a camera my Nikon Coolpix 5700 does shoot video, but its small video size and Quicktime format limitations make it not very useful for video applications in my opinion. Hui-Chen and I happened to be in that particular store when I noticed it. We were booked to leave for Thailand the following evening so we thought having a video camera would be a nice addition to our usual equipment roster.

The camera is small! It fits nicely in the outer pocket of my bush shirt, which is a very important consideration when traveling. The flip out LCD display is very well designed and surprisingly bright. The 5-position joystick is a bit weird and takes some getting used to.

The DV-30 comes with a rechargeable Li-on battery, and a handy wall cube charger (with a small footprint). It uses a standard SD card for file storage. As-purchased, the DV-30 does not come with any media card, but the store where we bought it has a promotion going and will give buyers a 512mb SD card. I already commented on the SD issue, but should remind you that your SD card must be capable of fast data transfer. Inside the box you will find a user manual (with some very funny typos!) an A/V cable for connecting your DV-30 to a standard television set (both NTSC and PAL formats are supported), a USB cable, a CD rom with drivers to use your DV-30 as a (so-called) webcam, and for file transfers, plus movie making software. Also included is a very unique set of earphones which are built into a neck lanyard. The lanyard holds the camera while strain-relieving the earphones so you can walk around with the thing around your neck and not have it tugging the ear buds out of your ears. The DV-30 is also an MP3 player, should you decide to burn up your SD card storage with audio files to listen to. It seems that everything made in Asia these days is also an MP3 player, and I cannot recommend the DV-30 as such because there is no way in hell that I’m ever going to use it to play music. For what its worth, the supplied earphones are stereo. The DV-30 is also a voice recorder and can store many hours of audio recordings, a very useful feature for meetings. And, as you might expect, the DV-30 is also a not-bad digital camera, with a basic CCD resolution of 3.0mp and can take interpolated shots up to 6.0mp. The box also contains a plain hand strap, which is what I personally use with mine. I find the lens to be the main drawback of this model. It is a fixed focus 8.4mm F2.8, which makes it a bit difficult to use in low-lighting conditions. Videos I have shot inside buildings just do not look very good unless the area is very well lit. Also, you want to make sure you don’t get too close to your subject or else it will be out of focus. Self portraits are pushing the limits of the close-focus range, as an arm’s length isn’t really far enough away to put the subject in focus. The automatic exposure control works, but its not as fast as a more expensive unit would be. Still, its more than just usable.

There are 3 main power switch settings: OFF, PLAY and REC. There are 3 other controls. There is a dual position rocker switch for MENU and MODE, as well as a 5-way joystick. On the left side of the unit, there is a speaker which is normally covered when the display is closed. On this surface is a + and – control for the speaker volume (which also controls the audio output level when using the A/V cable). The bottom has 3 jacks: AV Out, Audio (earphone symbol) and the DC power input. There is also a small format USB connector that has a really poorly designed rubber cover. The connector is fine, and the cover is fine too, but the little rubber strap which captivates the cover gets in the way when you try to put the cover back on the connector. Frustrating and time consuming. Since I have several card readers, I don’t really need to connect my DV-30 to the computer using the USB cable anyway.

Open the display and turn the unit on. The nice bright display comes on and the speaker emits a cute tune to let you know that the firmware is loading. Then you may start to use the unit. You can press MENU and browse through the various menu options – this thing supports seven languages including both traditional and simplified Chinese (tell me they didn’t have the mainland market in mind when they designed this!).

Overall, using the DV-30 is very easy. You simply press the joystick button (as opposed to rocking it to the sides or up and down) to begin (and end) video and audio recording, snap a digital photo, or start and stop playback. You should be able to begin recording your own videos within a few minutes of handling the unit and going through the various menu settings. The DV-30 defaults on the highest resolution and size video format.

While using the DV-30 as a digital camera, pressing the joystick to the right or left cycles through the various exposure presets and flash settings, respectively. The flash is actually useful and a surprising addition.

Now, this is where I tell you that there are a few things I do not like about the DV-30. Fortunately, these are far and few in comparison to what I do like about it. The DV-30 is one of those designs where you feel that they just didn’t “quite” get it right. The size and shape is really nice, but its very difficult to hold the darn thing! I find when using it, my finger goes right over the microphone and tends to cover it to the point of blocking the audio recording. It took some time before I realized just how good the audio recording capability is, because the first few videos I shot had terrible audio – my finger was over the mic! The design is somewhat of like some kind of gun, but the stock isn’t large enough to hold it as such. At first I found myself constantly handling the thing, trying to find a better grip, all the while making my videos look like earthquake footage. I could not hold the DV-30 very steady while walking the first few times I used it (I certainly can hold a gun steady while walking) but over time I found a good technique for holding the unit while shooting video and it looks steady.

The 5-way joystick is a good idea, but not this particular joystick. It actually does stick out pretty far beyond the dimensional limit of the camera body, making it a target for damage. I would like to see the DV-30 with something more like what you find on a Sony-Ericcson­ mobile phone, such as the S700i. I am just waiting for the end of this joystick to literally pop off from use. While I have no real inside information on the likelihood of this ever happening, I am after all, in the manufacturing business and know how things work.

When I get mine back from the factory I will take some detailed shots of it with my Nikon. I need to show you a few things about it. But for now, here are 2 digital photos taken with the DV-30: 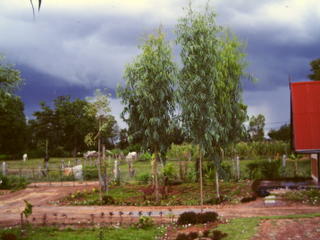 This one was taken on my friend’s resort property in a village called Phon. The color rendering is pretty accurate. The contrast in the trees seems good and overall the shot is not bad except for the flowers being out of focus in the foreground. This is no doubt because of the fixed focus lens. The dark specs in the upper portion of the photo are dragonflies. 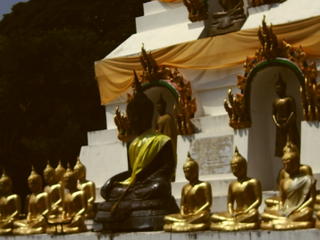 This shot was taken by Hui-Chen at a temple in Phon. Everything is pretty much out of focus, again the result of the fixed focus lens.

Both of these shots were taken on the 6 megapixel setting, large size. While the camera is useful, I wouldn’t dare use it as a primary camera for anything important.

I will address the following items in Part Two of this review, after the unit comes back from the factory:

–End of Part One–