Also called Prasat Puay Noi, and Puai Noi, Pueai Noi is located in the Ban Hua Khua District, Khon Kaen Province. It is officially referred to as a “Hindu sanctuary.”

The largest Khmer style religious shrine in Khon Kaen province, Pueai Noi was built between the 11th and 12th centuries C.E. and then renovated in the 13th century. The building consists of three shrines or “prangs” all built on the same original laterite foundation. The main buildings of the sanctuary face East (I have written about east-facing buildings in my personal commentary about the origin of America’s Stonehenge).

A rectangular library (panalai) constructed of laterite and red sandstone is located on the SE portion of the shrine and is surrounded by a stone wall. In fact, all of the buildings are contained within rectangular walls of laterite stone. Originally, the site was surrounded by a moat with open ends for entrance to the sanctuary. At the front of the property, there still exists a trace of an elevated pathway which is slightly higher than the average terrain. At the edge of the property itself is a set of stone steps which mark the beginning of the pathway. The moat is long gone. I had the unique pleasure of walking down these ancient steps and following the same path that was used by the people who inhabited this site so long ago.

The Eastern gopura (gate) inside the site features a nearly intact depiction of sleeping Vishnu. The Eastern main gopura is suffering from some missing pieces, unfortunately.

Two ponds outside the walls (apparently remnants of the moat) lie to the north and south of the library. An ancient Khmer inscription engraved on a wall of the principal shrine mentions a sacrificial ceremony involving a hermit named Vaisampayana. Apparently he was the sacrifice.

The ruins are quite intact, but the site has been restored in modern times. An analysis of the site began in 1989 and restoration was completed in 1994. In some places, it is clear that sections have been patched or replaced altogether with modern materials. In one area, I saw a piece of concrete rebar showing where a section of modern material repair had broken away. Nevertheless, the site is quite impressive and totally open, with no restraints upon persons walking around and inside the sanctuary itself, which is remarkable to say the least. Behind the site to the extreme rear of the property are several stacks of stones which apparently are parts of the sanctuary which cannot be restored to the site. As you can imagine, it’s a monumental jigsaw puzzle and some parts may not be identifiable. After 800+ years, it’s a wonder that there is anything left at all! I highly recommend Ku Pueai Noi for people who like archeological/historical sites. On the day that we went there, we saw absolutely no one around and this fact in itself makes a visit to Ku Pueai Noi very different from say, Ankor Wat which is totally overloaded with tourists. At Ku Pueai Noi, your photos will be of the sanctuary, not unknown tourists walking around getting in the way. 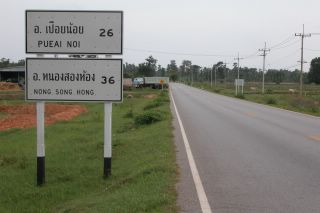 On the road to Pueai Noi 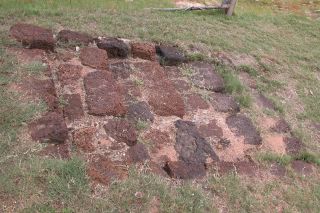 The steps leading to the ancient path 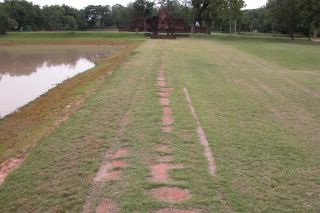 The ancient path leading up to the sanctuary 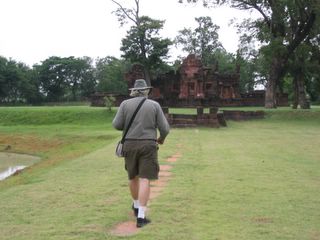 I had the unique pleasure of walking down these ancient steps and following the same path that was used by the people who inhabited this site so long ago. 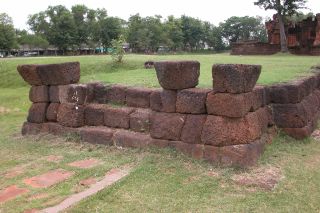 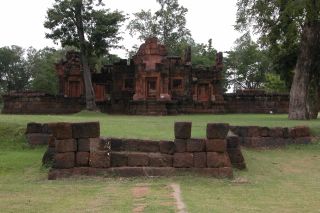 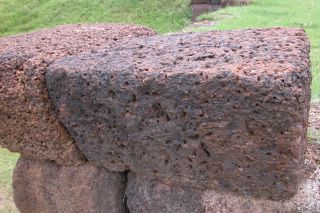 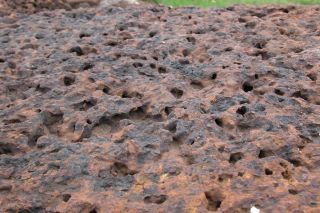 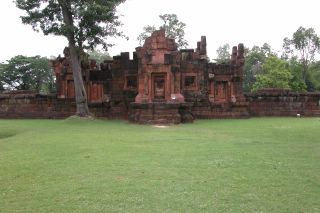 The site is impressive!

Panorama shot from the NorthEast 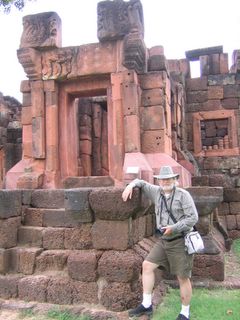 The steps leading up to the Eastern gopura 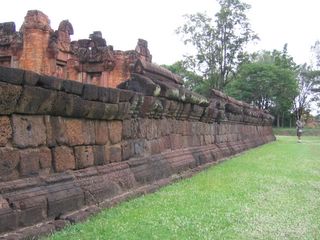 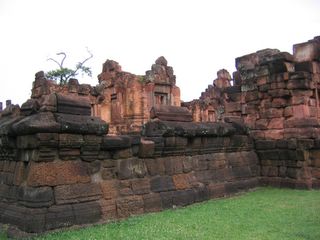 Rounding the rear of the site, we are looking at it from the NorthWest 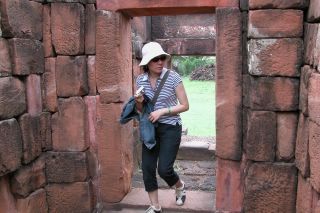 Hui-Chen entering the sanctuary from the Western (rear) gopura 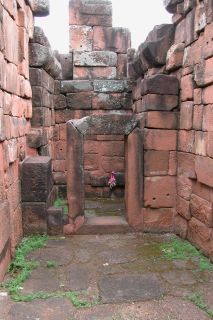 Interior wall section, showing a flower offering left by someone 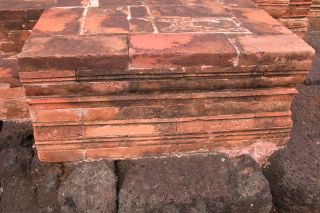 Some details of the brickwork inside the site 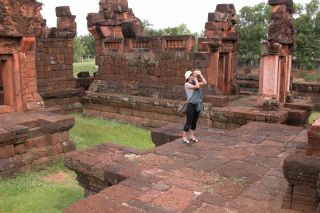 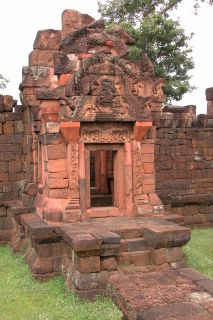 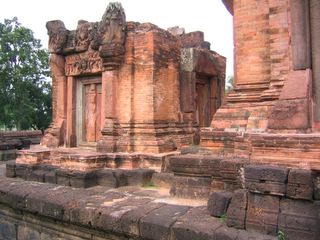 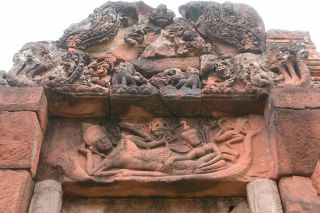 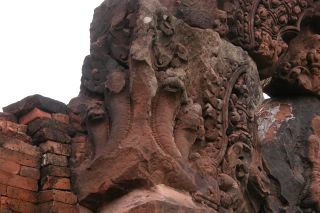 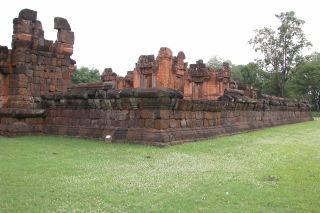 At the center of this shot you can see the sleeping Vishnu over the Eastern gopura inside the site. 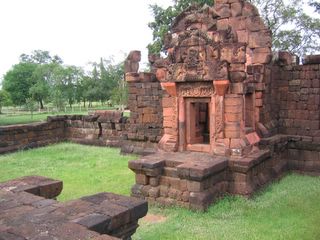 The view from inside directly behind the Eastern (main) gopura 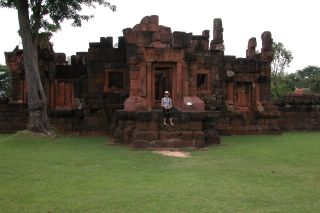 Hui-Chen on the steps leading to the Eastern (main) gopura

To get there from Khon Kaen, take highway 2, south for approximately 44 KM and turn left onto highway 23 (East). Its confusing but after the railroad tracks, go for about 1 KM and then bear left and follow the road to a rotary (roundabout). Exit the rotary 3/4 of the way around and continue East (you won’t see any signs for Route 23 for awhile – its not very well marked). Once you get to the newly constructed section, its smooth riding until you reach Route 2301. Take a right and head South. Soon you will see a sign for Pueai Noi and the distance of 26 KM. Follow Route 2301 until you reach Route 2297 and take a left (heading slightly SE). You will pass the police station and then suddenly be upon the site on the right, an estimated 4 KM or so from the police station. The drive time from Khon Kaen is about 1.5 hours.

Ku Pueai Noi is a true Bush Experience and I give it 5 machetes!